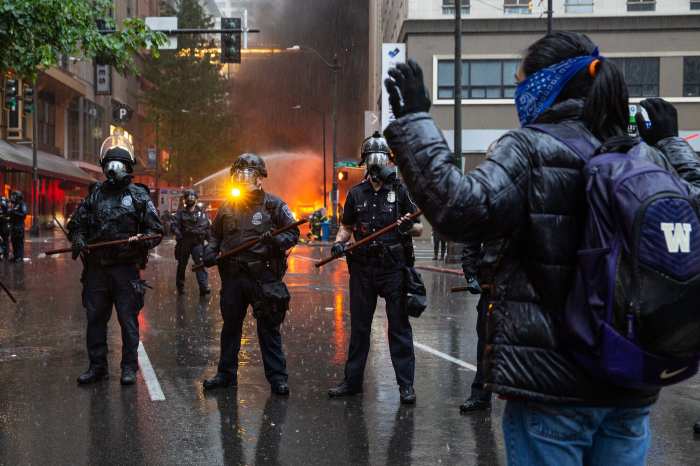 Black Radical Activists and the Dangers of the Police State

During recent anti-police brutality protests and marches across the United States, American police forces have displayed the very behavior that brought people to the streets in protest. Activists have been harassed, beaten, arrested, shot at with rubber bullets and tear gas, and shot and killed by white vigilantes encouraged by police. Critics have focused their blame on the largely peaceful protestors rather than the violent police forces whose actions have been caught on camera. The police have also used their arrest power to try and stifle protest including, in one incident, arresting the only Black state legislator in Kentucky during a protest against the police violence that killed Breonna Taylor. Police abuse during social justice protests has a long history and has been part of the resistance to the kind of radical political change needed for racial justice. Angelo Herndon’s activism in the 1930s, his frequent arrests, and his unjust imprisonment is part of this long tradition of using police to prevent racial justice and stifle dissent.

In 1937, Herndon published his memoirs titled Let Me Live, where he related his family’s poverty, his employment struggles, and most importantly his radicalization in the Communist Party. The book is sometimes considered one of the first prison memoirs, but some scholars have recently argued that it is a poignant critique of racial capitalism. Herndon’s story of growing up in poverty and facing racial discrimination and police harassment demonstrate what Charisse Burden-Stelly has described as the “mutually constitutive nature of racialization and capitalism.”

In Let Me Live, Herndon describes his growing awareness of capitalist exploitation as well as the use of police as capitalist agents to control Black bodies. Herndon was born in Wyoming, Ohio in 1913, one of eight children. His family’s precarious financial position declined further after his father died from miner’s pneumonia when he was nine years old. At only thirteen, Herndon and his older brother Leo left home and traveled to Lexington, Kentucky to find work as miners. His first job as a miner, working and living in a segregated community, was a wake-up call. His wages, which were meant to help his whole family, were often consumed by company fees leaving him and his brother barely able to support themselves. Frustrated, the Herndon’s left Kentucky and went to their father’s birthplace, Birmingham, Alabama. Leo found a job, but Angelo remained unemployed. In the process of trying to find work, Herndon met a labor agent who convinced him to leave town for work on a bridge. When he arrived, he realized that he and other Black laborers had been lured to work as slave laborers policed by armed guards and given no wages. Herndon and a few other workers managed to escape, despite being chased by dogs.

Herndon’s time in Birmingham radicalized him further. When he finally found work with a mining company, he was disgusted with the company union that failed to advocate for workers. He witnessed a coworker’s death after management failed to make necessary repairs to the machinery he worked on; he and other employees moved his body out of the way to continue work. While traveling through town he witnessed a conductor beat a Black man who did not defend himself; his frustrations mounted until one day he refused to move on a Jim Crow car, he was left alone after the conductor told people he was crazy. In June 1930 he happened upon an Unemployed Council (UC) leaflet announcing a meeting, this was Herndon’s introduction to political organization and the Communist Party (CPUSA).

Herndon became a UC organizer and began attending meetings, organizing events, and traveling to UC conferences. He respected the UC and CPUSA for embracing an antiracist position and calling for working-class unity and he came to believe that communism was the “only philosophy of living worthy of a thinking civilized man.” Unfortunately for Herndon, the police did not take kindly to communist organizing and especially to a Black communist. As Marion Ross argues, Herndon’s “redness” and “Blackness” made him a criminal in the eyes of the law. His first arrest came when he tried to organize his fellow miners into the United Mine Workers, he was charged with vagrancy, though he was employed, and held in solitary confinement for seven days.

At his trial, the prosecutor focused on the threat Black men posed to white women’s virtue; this was enough for a guilty sentence and twelve months imprisonment and a $500 fine. When the prosecutor painted Herndon as a sexual predator, he was alerting the all-white jury to the belief that the Black body had to be controlled to secure white supremacy. His conviction was eventually overturned in the circuit court, but it was enough to move Herndon to officially join the CPUSA. Soon after he was arrested again walking to a CPUSA Labor Day rally; he was held for eleven days with other prisoners detained for mental illness. After his second arrest, Herndon’s memoir pivots from a story of radicalization to one of fascist police abusing him and his fellow organizers with impunity.

Herndon’s every movement in Birmingham was followed by police who arrested him on any pretense; it became such a frequent occurrence that he claimed it drove him further into the arms of the CPUSA. But it also became too difficult to live there, so in 1931 he took a job with the Trade Union Unity League to help organize longshoremen in New Orleans. Even in Louisiana the police dogged his every move, and he was arrested again. He also became active in the campaign to free the Scottsboro boys, nine Black youths arrested for allegedly raping two white women on a train.

Herndon returned to Alabama to organize for the Scottsboro defense and to try and help with the organization of sharecroppers in Camden County, but he was chased out of town by the threats of a lynch mob. When he arrived back in Birmingham he was arrested right off the train. Herndon did not stay long, he was sent to organize for the UC in Atlanta, GA in 1932. When the city announced it was going to drop over 20,000 people from the relief rolls, Herndon sprung into action. He began producing leaflets and organizing marches, all of which brought law enforcement attention. While picking up mail at the post office he was arrested and charged under an 1861 law to prevent slave insurrections; the place where he was staying was raided and all of his pamphlets and books were seized, later to be used against him in court.

Herndon described his subsequent imprisonment, trials, and conviction as being “crucified by capitalist law and order.” He was held incommunicado until a fellow inmate smuggled out a letter to the International Labor Defense, an organization devoted to defending workers. It was this arrest that prompted Herndon to write Let Me Live; in it he described his months in solitary, then on death row, the “kangaroo court” trial in which the prosecutor went into a “lynch frenzy,” and his conviction and sentence of 18-20 years on a chain gang, a death by labor sentence. This arrest would make Angelo Herndon a household name for radicals raising awareness about the dangers of the police state and its concerted efforts to quash social justice. All told, Herndon would spend two and a half years in jail while his appeals were heard. After the CPUSA mobilized a global defense around Herndon, the charges would eventually be dropped, and he would be free. He later described his imprisonment as an “apprenticeship in the revolutionary struggle.”

Herndon recognized what even today some Americans are only just realizing: that the police are not public servants meant to keep the peace, that they are agents of social control. While speaking to other prisoners, Herndon told them that if there was a “decent government” who cared for people’s needs, rather than protecting capitalist profits, fewer people would be imprisoned. Herndon was arrested so many times as a known UC organizer that he lost count; he recruited others to the UC and CPUSA by arguing that they had to make change because we are all “in the same leaky boat.” His memoirs have been described as prison literature, a critique of racial capitalism, communist propaganda, and in the tradition of slave narratives — it is also a book about police abuse and control and policing as a tool to control Black America and working people. It is a narrative that is all too familiar to today’s activists, that policing is a barrier rather than a path to social justice.

Source: Black Radical Activists and the Dangers of the Police State – AAIHS 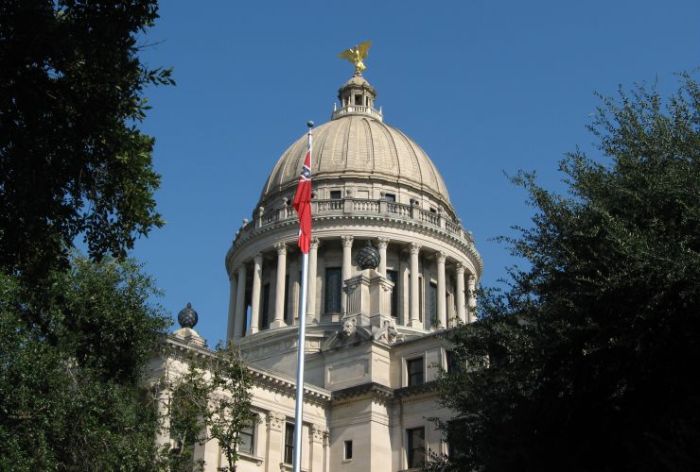 “Black radicals had been experimenting with electoral strategies since the 1960s. In 2008 the Malcolm X Grassroots Movement (MXGM) studied the lessons learned from this work in the South and identified ways to advance movement goals. This work culminated in the 2012 publication of the Jackson-Kush Plan, which called for people’s assemblies (a grassroots co-governance model), an independent black political party, and a broad-based solidarity economy. Along the way, MXGM members identified Chokwe Lumumba to run for Jackson city council in 2009. He won, and by the time he ran for mayor four years later, he was well known, with an established infrastructure to support him.”

Source: The Most Radical City on the Planet | Boston Review 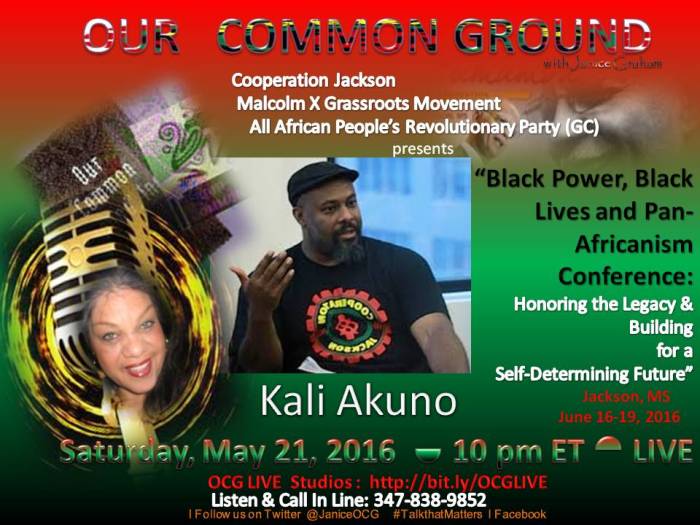 What Joe Biden should say about white supremacy – The Boston Globe

Black Radical Activists and the Dangers of the Police State – AAIHS