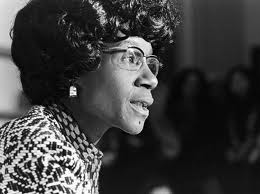 Congresswoman Shirley Anita St. Hill Chisholm was the first African-American woman elected to Congress. Chisholm was a founding member of the Congressional Black Caucus and the first African American to make a serious bid for the Presidency of the United States of America. Congresswoman Chisholm was known for her advocacy on behalf of women and underserved minorities. She was also noted for her opposition to the U.S. involvement in the Vietnam War, her support of full-employment programs, and her efforts on behalf of black colleges, compulsory education, and minimum wage.

Shirley Chisholm was born in New York City on November 30, 1924. She grew up in Barbados and in Brooklyn, New York. She graduated with a Bachelor’s Degree from Brooklyn College in 1946. While working as a teacher, Chisholm earned a Master’s degree in elementary education from Columbia University’s Teacher’s College. Until 1964, she served as a director of a childcare center and an education consultant.

In 1964, Chisholm ran and was elected to the New York State Legislature where she served for four years. Then in 1968, Chisholm became the first African-American woman elected to Congress, representing New York’s 12th District.

Chisholm served the United States House of Representatives for seven terms, from 1968-1983 (91st-97th Congresses). She was the first African-American woman elected to the U.S. Congress and was an effective advocate for the needs of minorities, women and children. Chisholm served on the Education and Labor, Rules, and Veterans Affairs committees. During her fifteen years in the House, Chisholm co-founded the National Political Congress of Black Women, supported the Equal Rights Amendment, and fought to legalize abortions. Chisholm was also a co-founder the National Organization for Women (NOW). In 1972, Chisholm was also the first African-American woman to run for President of the United States. When she retired in 1983, she was the third-highest ranking member of the Education and Labor Committee.

After leaving Congress, Chisholm was named to the Purington Chair at Mount Holyoke College in South Hadley, Massachusetts, where she taught politics and women’s studies, while remaining an advocate for education. In both 1984 and 1988 Chisholm worked on the presidential campaigns of Rev. Jesse Jackson, Sr. In 1987, she retired from teaching and moved to Florida. Rep. Chisholm died on January 1, 2005.

Shirley Chisholm is also the author of two autobiographical works entitled Unbought and Unbossed (1970) and The Good Fight (1973).