“The Flames of Liberation: Rebellion and Resistance”

“Transforming Truth to Power, One Broadcast At a Time”

We open our 2nd Session of the 2015 Season continuing to examine the depth of structural and institutionalized racism, the impact of white supremacy and the concept of #BlackLivesMatter as a clarion call and the its promise as a movement.  As always we ask, “What is your End Game?”                      We invite you to join us and be part of the response to THE STATE OF EMERGENCY.

To help us kick off this session we have asked Rev. Ruby N. Sales to join us a co-moderator on the critical questions and issues that challenge, trembling like a swelling tsunami beneath the ocean. A seasoned veteran of the civil and human rights campaigns of our time and a fierce and clear visionary of Black Power, we believe that she is most appropriate to help us press out an authentic narrative on these issues.

Institutionalized Racism is the concept and practice of white supremacy. It is the practice of discrimination and oppression based on skin color, physical characteristics, continent of origin and culture. It has its origins as a justification for slavery and the conquest of the Americas. From the beginning, slavery in the United States was tied to the development and growth of capitalism. Founded on the sale and ownership of human beings on the basis of their physical characteristics and color, its purpose was the exploitation of unpaid labor for super profits. As chattels, Africans were hunted like animals, transported to the “New World,” and then sold on the auction block like beasts of burden. In like manner Native American Indians were exterminated on a massive scale.

Moral and intellectual rationales were invented and continue to justify this kidnapping, sale, enslavement and genocide against human beings. As an ideology, racism provided the moral and intellectual underpinnings of slavery, the westward expansion of colonialism and the seizure of half of Mexico. Thus the purpose of this doctrine was, and still is, to put forward ideas and theories founded on the myth that Black people and other people of color are inherently inferior.

Almost 130 years after the Emancipation Proclamation, the legacy of slavery remains. It is embedded in and influences every aspect of social, economic and political life. Institutionalized racism is the combined economic, political, social, cultural, legal, ideological and other structures that exist to maintain the system of inequality. #RaceMatters

Institutionalized racism has economic, social, political, ideological and cultural forms, and denies equality, justice and dignity to all people of color.  There are new problems because of the systemic nature of crisis. Our discussions should examine what adjustments must be made in these new efforts to eradicate our place in this society. We rebel and resist the effort to force us into the margins, to make us invisible and to remove us to prison for profit camps.

Our discussions must explore and examine how to elevate our voices in the fight against police brutality, housing discrimination, immigrant rights, and the dismantlement of public education to mention a few issues. At OUR COMMON GROUND provide “a place for our unfiltered voices”.  With the brightest, most loyal and insightful Black activists, community organizers and servants, scholars, researchers, journalists and social scientists we raise, clarify and illuminate the racist dimension of these issues, show how their roots lie in the system of capitalism and its new stage of crisis, and come up with concrete ideas to launch new initiatives and support existing ones.

As a set of institutions, racism is infused in the very foundations of our society and is inseparable from the economic foundations of U.S. capitalist society. The “new domestic military policing” is implemented to intimidate and destroy racially homogenous communities and put into place a ‘superexploitation’ of racial oppression that ensures our silence and to fill prisons serves to create and make real the essence of white supremacy.  We are living in an increasingly surreal special system of oppression and racism perpetrated by a narrative dictated outside of our community. None of this is new; the struggle to liberate ourselves has been before us since our time on these shores. One of our most effective weapons is to ensure that we work from an authentic narrative and that its formulation comes from our Truth. OUR COMMON GROUND for more than 33 years has focused its broadcast mission on ensuring that the Black Truth illuminates and informs our struggle.  #BlackTruthMatters #BlackVoiceMatters 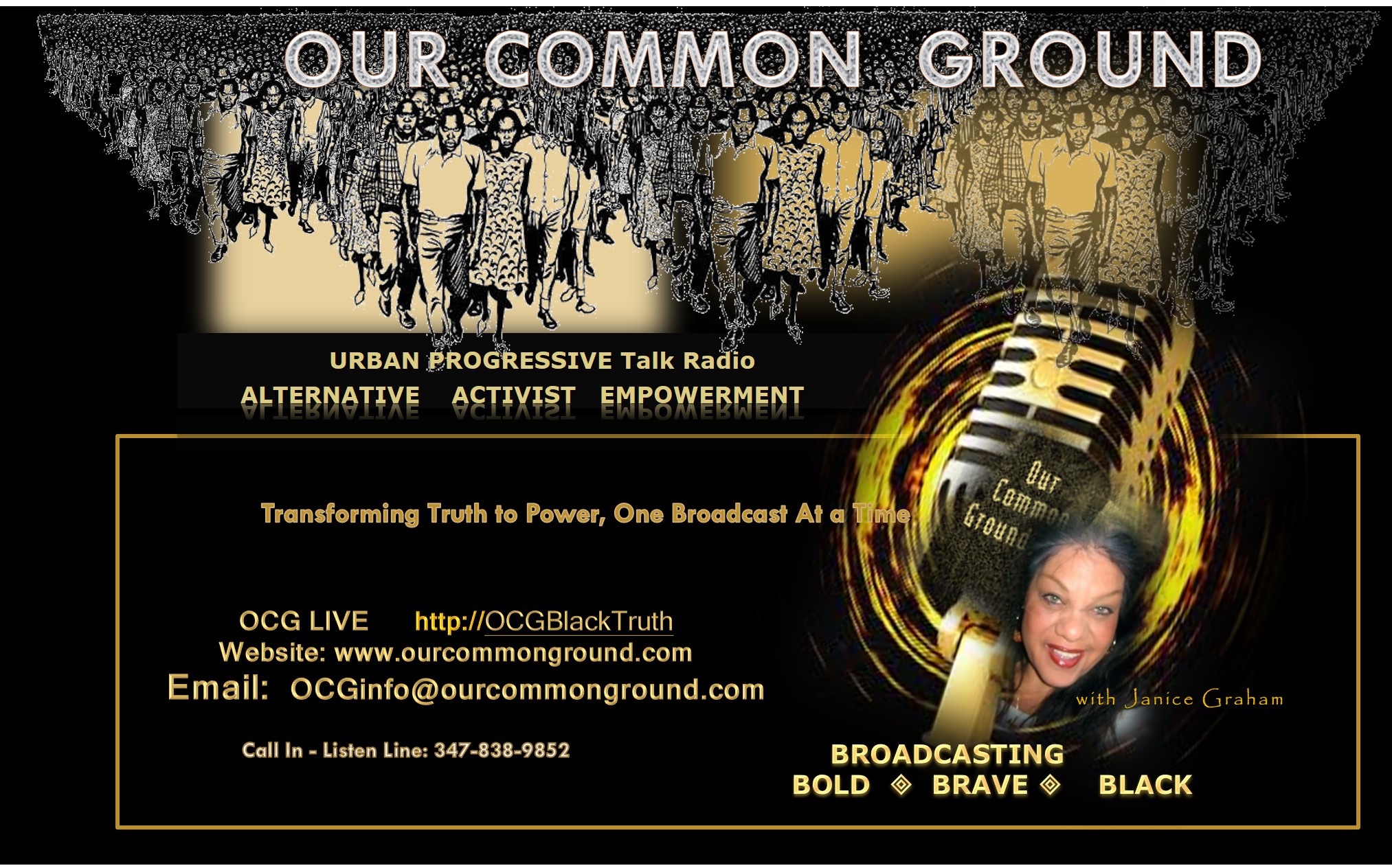 "Over Policed; Under Protected"