This is longer than a 140-character Tweet, but I respectfully ask that all who participated in exchanges over a statement I made on Twitter on February 4, 2021 concerning #PureReparations, that aroused a firestorm of responses, please read this from start to finish.

This is longer than a 140-character Tweet, but I respectfully ask that all who participated in exchanges over a statement I made on Twitter on February 4, 2021, concerning #PureReparations, that aroused a firestorm of responses, please read this from start to finish. Some of the responses to my statement were serious, thoughtful, and critical, but others were so hostile. I am convinced many of them were written by people who only had, at best, second- or third-hand knowledge of the content of my message.

Let me be clear, I remain steadfast that African American reparations in the United States should be designated specifically for black Americans who are descendants of persons enslaved in the United States. It is a position that I have maintained for upwards of 20 years, first articulated with the eligibility criteria I presented in an article published with Dania Frank in 2003 in the American Economic Review.

The criteria expressed at the time were twofold: 1. An American citizen would have to demonstrate they have at least one ancestor enslaved in the United States. 2. An American citizen would have to demonstrate that for at least ten years before the adoption of a reparations program they self-classified as black, negro, or African American. The first criterion is a lineage standard; the second is an identity standard. Both standards must be met to merit receipt of reparations payments.

In our recent book, From Here to Equality (FHTE), Kirsten Mullen and I modify the identity standard to lengthen the time to at least twelve years (two Senatorial terms) and to include the adoption of a study commission for reparations as one of two events that would trigger the time count on self-classification.

The core objective always has been to include all persons, and their descendants, who have been subjected to the cumulative, intergenerational effects of slavery, legal segregation and white terrorist violence, and post-Civil Rights Era mass incarceration, police executions of unarmed blacks, and ongoing discrimination in the justice claim. This is the community whose ancestors were denied the promised 40 acres as restitution for the years of bondage and as a material springboard for entry into full citizenship in the United States.

Kirsten and I argue further, in FHTE, the best economic indicator of the combined effects of these atrocities is the racial wealth gap.  We propose that elimination of the gap yields the baseline value for a reparations plan—demanding a federal government expenditure of $10 to $12 trillion.  It is a key aspect of our project to generate a research-based standard for determining the size of the bill that is due. We do not identify an upper bound for the bill.

We also insist that priority be given to mobilization of the funds in the form of direct payments to eligible recipients, whether cash transfers, trust accounts, other types of endowments, or some combination thereof.

The two eligibility criteria necessarily exclude many Americans. The lineage standard will exclude all blacks in the United States who migrated to the United States and became citizens after the end of the Civil War. Their descendants also will not be eligible, in the absence of a parent’s or grandparent’s intermarriage with black Americans having ancestry anchored in US slavery. Counting among blacks excluded would be the relatively small group that migrated to the United States during the Jim Crow years (estimated to be, according to a Smithsonian study, to the right of the decimal point). Also excluded is a much larger group of black immigrants (now approaching ten percent of the nation’s black population) who arrived after 1964, especially coming in large numbers from the 1980s onward.

The identity standard excludes all persons who self-identified as non-black, inclusive of all white Americans, at a point where there was no apparent financial benefit from classifying oneself as black.

Meeting the lineage standard necessitates serious genealogical research. As a result, in FHTE, Kirsten Mullen and I recommend the federal government establish an agency with genealogists with expertise in African American ancestry to provide free services to all persons seeking to establish their reparations claim. Despite that recommendation, we continue to get substantial push back from those who say many black Americans with ancestors enslaved in the US will hit a wall in getting past the 1870 Census to identify their particular ancestors who were held in bondage before 1865. Therefore, I have been giving more thought to modifications in the criterion that would make it easier for all black American descendants of U.S. slavery to be assured of inclusion.

One possibility that seemed reasonable is the one I advanced that stirred the pot to a boil—include black immigrants who came during the Jim Crow years on the eligibility list. Let me emphasize, I advanced this to prompt discussion. I even referred to this in a later post as a “trial balloon,” which left me open to the somewhat humorous charges that the balloon popped or, quite the opposite, the balloon was made of lead.

Here is the thinking that I pursued: Allowing pre-1950s black immigrants onto the reparations roll eases genealogical proof required of black American descendants of U.S. slavery to establish their lineage claim. You necessarily have a tradeoff between letting a small number of otherwise excluded black folk in the door versus keeping the strong genealogical standard that will demand going past the 1870 “wall.”  Under the former case, with the relaxed lineage standard, a person would have to demonstrate, say, that they have at least two black ancestors who were citizens of the USA before 1950 or 1960.

I reject the “slippery slope” argument that has it that making this exception opens the gates for every other group to piggyback onto the reparations’ claim. Conditions can be drawn so precisely that no additional groups will become eligible.

Nevertheless, I do take seriously, the following critical response to my “trial balloon”: The limitation of African American reparations to black American descendants of US slavery is a matter of principle that should not be compromised. America’s history of racial injustice has targeted this community so consistently and with such ferocity that we should brook no modification in the criteria, even it remains more difficult for each individual to establish eligibility for the merited compensation.

In fact, I take it so seriously, in a later message, I indicate that I would not advance as an option the proposal any longer, and I will stand committed solely to the original criterion. Unlike what is suggested in a number of messages on Twitter, I never proposed that recent black immigrants should be eligible for reparations from the U.S. government. Nor do I anticipate reneging on that position. . . ”

Source: Reflections On Recent Controversy And The Case For #PureReparations | Actify Press 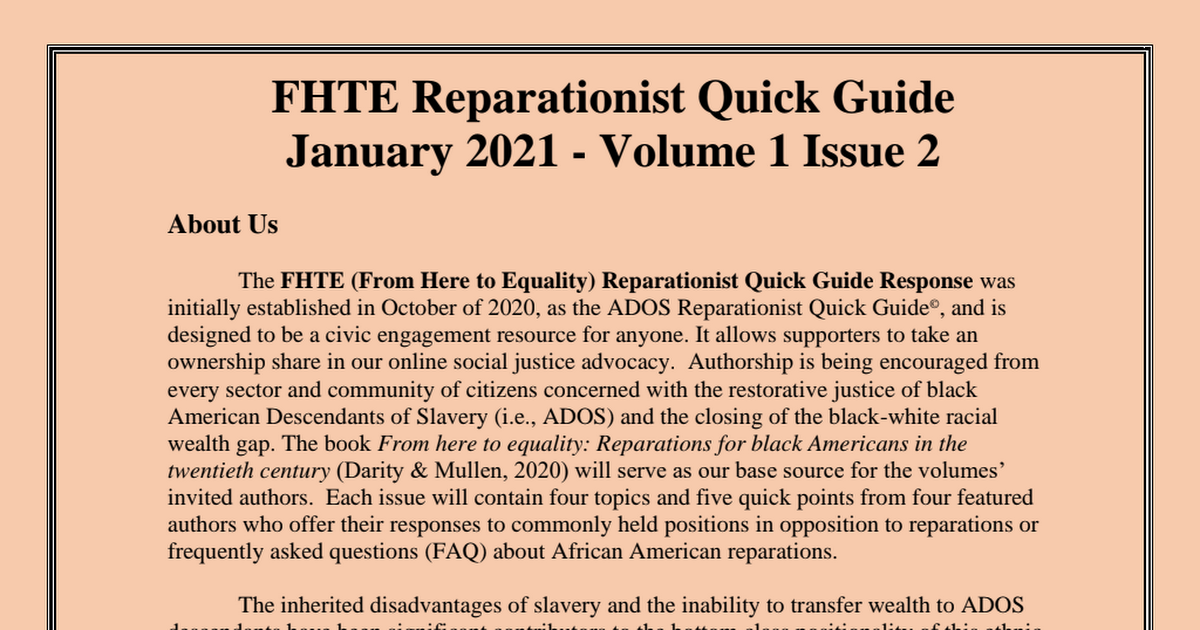 About Us
The FHTE (From Here to Equality) Reparationist Quick Guide Response was
initially established in October of 2020, as the ADOS Reparationist Quick Guide©, and is designed to be a civic engagement resource for anyone. It allows supporters to take an ownership share in our online social justice advocacy. Authorship is being encouraged from every sector and community of citizens concerned with the restorative justice of black American Descendants of Slavery (i.e., ADOS) and the closing of the black-white racial
wealth gap. The book From here to equality: Reparations for black Americans in the twentieth century (Darity & Mullen, 2020) will serve as our base source for the volumes’ invited authors. Each issue will contain four topics and five quick points from four featured authors who offer their responses to commonly held positions in opposition to reparations or frequently asked questions (FAQ) about African American reparations.

The inherited disadvantages of slavery and the inability to transfer wealth to ADOS descendants have been a significant contributor to the bottom class positionality of this ethnic group. This series is published to encourage study and dialogue. It is an instrument for personal empowerment. The guide creates a space for the civic engagement participation of Reparationist in national coalition-building, including petitioning for significant revision (or
replacement) of the bill H.R. 40 (S.1083) currently under consideration in the U.S. Congress.