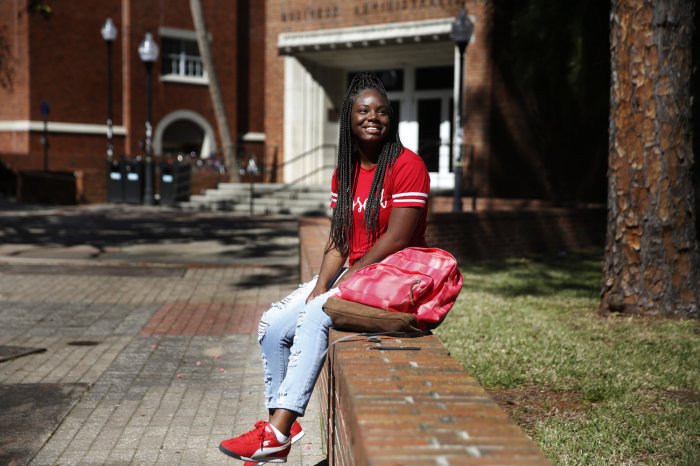 ” . . . Of course, what Parks didn’t know, is that nearly 4 million college students are doing this right now — that’s about a fifth of all undergraduates. Student parents are mostly women (about 70 percent) they are more likely to be from low-income families and students of color. In fact, 2 in 5 black women in college are mothers, and the majority of them are single.”These are the people we need to be investing in,” says Lindsey Reichlin Cruse, who studies student parents at the Institute for Women’s Policy Research. “They’re really facing the odds, working hard to provide for their families and that’s what this country is built on.”And the data shows that investing in these students is a good bet. Student parents have better GPAs and grades than their classmates without kids. But, they are less likely to graduate. “It’s these other factors, these life factors that get in the way,” says Reichlin Cruse.”

Source: This Mom Learned She Was Pregnant In College. Now, She’s Graduating : NPR

The Institute on Assets and Social Policy (IASP) develops strategies, processes, and policy alternatives that enable vulnerable populations to build resources and access opportunities to live securely and participate fully in all aspects of social and economic life.

The dramatic gap in household wealth that now exists along racial lines in the United States cannot be attributed to personal ambition and behavioral choices, but rather reflects policies and institutional practices that create different opportunities for whites and African-Americans, new research shows.

So powerful are these government policies and institutional practices that for typical families, a $1 increase in average income over the 25-year study period generates just $0.69 in additional wealth for an African-American household compared with $5.19 for a white household, in part because black households have  fewer opportunities to grow their savings beyond what’s needed for emergencies.

This groundbreaking study, The Roots of the Widening Racial Wealth Gap: Explaining the Black-White Economic Divide, statistically validates five “fundamental factors” that together largely explain why white households accumulate wealth so much faster over time than African-American households.

On February 27, 2013 there was a webinar hosted by the Insight Center’s Closing the Racial Wealth Gap Initiative, PolicyLink, and Tom Shapiro, Director of the Institute on Assets and Social Policy at Brandeis University.  This webinar presented breakthrough research on what has been fueling our country’s growing racial wealth divide for the past 25 years.  Click here to listen to the playback.

As America continues to become more diverse, the nation’s ability to achieve sustained growth and prosperity hinges on how quickly we can erase lingering racial and class divides and fully apply everyone’s talents and creativity to building the next economy.

Compass Working Capital, a small innovative CBO, was selected for funding by Strategic Grant Partners, Boston, MA, to implement an experimental asset-building approach to the HUD Family Self-Sufficiency (FSS) program for recipients of housing vouchers in Lynn, MA. IASP is developing and implementing the process and outcome evaluations and the preliminary cost/benefit analysis for this pilot FSS program. The multi-year evaluation focuses on how families use this opportunity to move toward economic stability, positive impacts sustained after program graduation, and the cost-effectiveness of taking the program to scale.

IASP examines the long-term economic stability and risk of senior citizens. The “Living Longer on Less” series, released in collaboration with Dēmos, includes:

Rising Economic Insecurity among Senior Single Women, October 2011 •  This most recent report in the series reveals that nearly half (47%) of all senior single women in America do not have adequate retirement resources to meet even their most basic needs for the remainder of their lives, and this number is rising.

Previous reports in the “Living Longer on Less” series include: