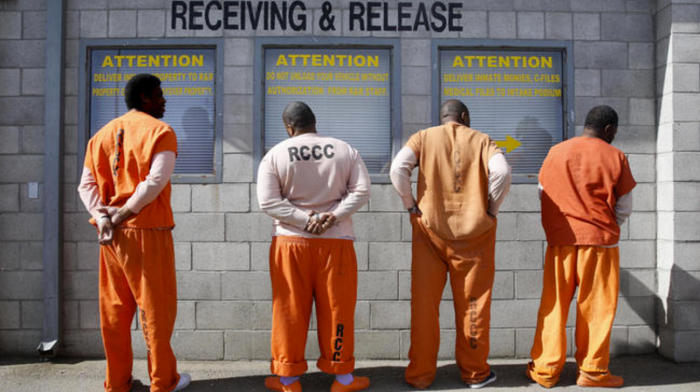 So Many Black People Locked Up it has Warped our Sense of RealityApril 23, 2016 0 45Share on Facebook Tweet on Twitter Prisoners from Sacramento County await processing after arriving at the California Department of Corrections and Rehabilitation Deuel Vocational Institution (DVI) in Tracy, Calif. (Rich Pedroncelli/Associated Press)For as long as the government has kept track, the economic statistics have shown a troubling racial gap. Black people are twice as likely as white people to be out of work and looking for a job. This fact was as true in 1954 as it is today.The most recent report puts the white unemployment rate at around 4.5 percent. The black unemployment rate? About 8.8 percent.But the economic picture for black Americans is far worse than those statistics indicate. The unemployment rate only measures people who are both living at home and actively looking for a job.The hitch: A lot of black men aren’t living at home and can’t look for jobs — because they’re behind bars. READ MORE

Source: So Many Black People Locked Up it has Warped our Sense of Reality | Emerge News Online