When my grades started dropping senior year of high school, I didn’t think much of it. School had never held much interest to me and I had always done just enough to “get by” anyway, so not being able to focus in Physics or AP Government wasn’t a big deal to me. And I never had many true friends, just a bunch of associates who came in out and of my life, so the fact that I closed myself off from them didn’t register as a warning sign. The sleeping in late, the not eating, the constant worrying about things that hadn’t happened…I thought I was just being my normal, neurotic self.

But staring in the mirror, wondering how much blood there would be if I bashed my head against it, wasn’t normal. Sitting at the dinner table thinking about taking the knife I’m using to cut my steak to slit my wrists, wasn’t normal. Something was missing.

I had thought about suicide before, but never in any real way. It was always a “what if?” Now, it had become a “maybe I should…” I learned firsthand what the true meaning of the word “depression” was.

Something was missing, but I had no idea what.

I “got over” it though. I moved past it. I never spoke a word of it to anyone. I was “better.”

Two years later, I wasn’t just “better”, I thought I was completely “cured.” I spent the summer in Atlanta working a well-paying internship, going to concerts every week, meeting some of my heroes, just enjoying life.

Then I bought the Gnarls Barkley album, St. Elsewhere. I was taken aback. I realized I wasn’t too far removed from the space Cee-Lo was singing from. The isolation, the helplessness, the feeling of being trapped inside your own mind and it being locked from the outside and there is no one around to pick the key up from under the welcome mat to let you out…these feelings were all too familiar. I never spoke a word of it to anyone. No matter. Cee-Lo was doing that for me.

There’s a song toward the middle of the album called “Just a Thought” that is a hauntingly accurate description of what goes through a person’s mind while suffering from severe depression. Each verse ends with the phrase “…and I tried, everything but suicide, but it crossed my mind.” I could only nod silently in agreement as he belted out the most secret of my thoughts for the whole world to hear.

MORE in this series of stories

MORE on Depression in the Black Community 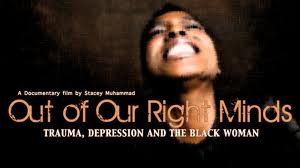 Out of Our Right Minds – Trauma, Depression and the Black Woman

OUT OF OUR RIGHT MINDS, Trauma, Depression and the Black Woman from INTELLIGENT MEDIA GROUP on Vimeo.

This film explores Post Traumatic Slave Syndrome and and the experience of trauma, and how the lives of Black women have been affected by these experiences.

Black women and men from all walks of life, speak openly and candidly about depression, mental illness, anxiety, stress…why these discussions are considered taboo in the African American community..and ways in which we begin to … and continue to … heal the wounds.