The American Case Against a Black Middle Class 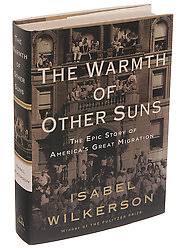 I went on a Twitter rant yesterday because I’d finished Isabel Wilkerson’s phenomenal The Warmth Of Other Suns. The book is a narrative history of the Great Migration through the eyes of actual migrants. Several points stick out for me.

1) The Great Migration was not an influx of illiterate, bedraggled, lazy have-nots. Wilkerson marshalls a wealth of social science data showing that the migrants were generally better educated than their Northern brethren, more likely to stay married, and more likely to stay employed. In fact, in some cases, black migrants were better educated than their Northern white neighbors.
2) In this sense, the migrants to Northern cities resembled immigrant classes to whom black people in these same cities are often unfavorably compared to. There’s a quote in Wilkerson’s book which I can’t find where a supervisor basically says that blacks are the favored workers because they will work hard at the worst jobs for relatively little money. You would have thought the guy was talking about Hispanic farm-hands today.
3) The black migrants were not immigrants. They were citizens of this country who did not enjoy its full protection. Unlike other immigrant classes, blacks were never able to cash in on their hard work and middle-class values. For all of their work-ethic, education-valuing, and long-term marriages, they received the worst wages in the worst jobs, were limited to the worst housing, and stuffed in the worst schools.
4) What becomes clear by the end of Wilkerson’s book is that America’s response to the Great Migration was to enact a one-sided social contract. America says to its citizens, “Play by the rules, and you will enjoy the right to compete.” The black migrants did play by the rules, but they did not enjoy the right to compete. Black people have been repeatedly been victimized by the half-assed social contract. It goes back, at least, to Reconstruction.
5) The half-assed social contract continues to this very day with policies under the present administration, like the bail-out of banks that left the homeowners whom the banks conned underwater. The results of the housing crisis for black people have been devastating. The response is to hector these people about playing video games and watching too much television. Or to tell them they’ve have “an achievement gap.” It is sickening, dishonest, and morally repugnant.
6) America does not really want a black middle class. Some of the most bracing portions of Wilkerson’s book involve the vicious attacks on black ambition. When a black family in Chicago saves up enough to move out of the crowded slums into Cicero, the neighborhood riots. The father had saved for years for a piano for his kids. The people of Cicero tossed the piano out the window, looted his home, torched his apartment and then torched his building. In the South, when black people attempted to leave to earn better wages, they were often forcibly detained, and thus kept in slavery as late as the 1950s.
On a policy level, there is a persistent strain wherein efforts to aid The People are engineered in such a way wherein they help black people a lot less. It is utterly painful to read about the New Deal being left in the hands of Southern governments which were hostile to black people, and then to today see a significant chunk of health care, again, left in the hands of Southern governments which are hostile to black people.  At this point, such efforts no longer require open bigotry. They are simply built into the system.
7) “That the Negro American has survived at all, is extraordinary.” That is from the Moynihan report, which neo-liberals are fond of touting, while ignoring the report’s lengthy policy recommendations.
8) Get the book. Read it now. Today is too late.

TA-NEHISI COATES – Ta-Nehisi Coates is a senior editor at The Atlantic, where he writes about culture, politics, and social issues for TheAtlantic.com and the magazine. He is the author of the memoir The Beautiful Struggle. More