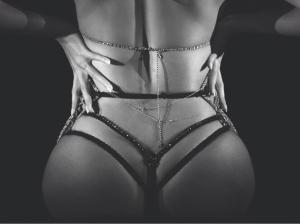 In Pimp Theory, a “bottom bitch” is the one in the whores’ hierarchy who rides hardest for her man. She’s the rock of every hustler economy and her primary occupation is keeping other ho’s in check and gettin’ that money. She isn’t trying to elevate the status of her sister ho’s. She isn’t looking to transform pimp culture. The bottom bitch is a token who is allowed symbolic power, which she uses to discipline, advocate for, represent and advance the domain of the stable.  In pop culture, she represents the trope of the chosen black female, loyal to her man and complicit in her own commodification.

In hip hop vernacular she has emerged as the “Boss Bitch” or “Bawse”, titles you’ll hear used liberally across urban/pop discourses – from the streets to rappers to the hip hop, basketball and ATL housewives.  What she represents is an appearance of power within a structure of male dominance, but in reality this “power” is merely vicarious and not a positional power in and of itself.

Admittedly, bottom bitch is an unfortunate metaphor to use for framing conversations about Beyonce, but when you’re married to “Big Pimp’n” and his cameo on your new self-titled album, coined a “feminist masterpiece,” is all about how he gon’

you leave us no choice. When elements of the feminist community rise up to applaud your simplistic, pro-capitalist, structurally violent sampling of feminism, the metaphor becomes even more relevant. Moreover, we’re concerned that the capitalist ethics of mainstream hip hop has seduced feminist allies into flirting with bottom bitch feminism in their silencing of those who would critique Bey and the systemic violence she represents.

To this we ask: Is a feminism sponsored by the corporate music industrial complex as big as we can dream? Is the end game a feminism in which the glass ceiling for black women’s representation only reaches as high as our booties? Can’t we just love Bey as an amazing corporate artist without selling out the hard won accomplishments of our black feminist and womanist foremothers?  Can we not love her for the gorgeous and fierce mega pop star she is without appropriating her for some liberal, power feminist agenda?

These questions asked, we do understand the terror and mistrust some black women may feel when confronted with representations that reflect us to ourselves as brilliantly beautiful.  We also get the impulse that these same women may have to criticize and destroy such images. But this is not that. Our critique of Bey as a feminist doesn’t come from a place of fear. Indeed it may even be more a critique of the black feminist blogosphere. Our real fear is of a bourgeoning cadre of institutional gatekeepers of “appropriate” black feminist politics going in hard with their facile analyses, shaming and silencing black women with alternative reads of B.

Real Colored Girls are not here to promote or co-sign the idea that to critique Bey’s “Flawless Feminism” is to hate black women.  We reject the idea that love for the folks equals blind loyalty. Our deep and abiding love and respect for the ancestors will never permit an image of feminism wrapped in the gold chains of hip hop machismo.  We ain’t throwin’ no (blood) diamonds in the air for ‘da roc, no matter how many feminists you sample over a dope beat. We’re smarter than that. We’re worth more than that.

Insisting on a rank and file consent and approval to these ‘terms of engagement’ is a form of bullying and in the spirit of Audre Lorde we remind you that silencing dissent will not protect you.  We feel strongly that it is our duty and imperative to engage multiple perspectives in the marketplace of ideas, supporting open discourse, lest we find ourselves guilty of policing one another into a dishonest respectability.

Our work is not done. Beyhive Bottom Bitch Feminism does not replace nor is it even in the realm of the critical work of black women writers and artists across the discursive spectrum, as some folks have proclaimed across social media. As womanists and black feminists, we have a responsibility to bring it with our cultural work which we will infuse, at all times, with an ethic of care and responsibility. The coontocracy of assimilationist corporate negroes is in full effect, riding for patriarchal capitalist agendas and having us believe that somehow Bey’s success is a step toward some dystopic vision of progress for Black women. There may be empowerment for some folks but by and large it is a false hope steeped in capitalism and individualism, supporting the escapist desires of rampant pornographic consumerism.

This essay does not come from a place of ‘who gon’ check me, boo?’. We would like to invite dialogue, conversation and a multitude of perspectives. We’re thinking that our next conversation will be about how Beyonce has opened the door for further discussion around black female sexuality. We’ve been feelin’ this quote by bell hooks from her essay “Selling Hot Pussy”:

What are your thoughts?

REAL COLORED GIRLS  Who Are They ?

One thought on “THE PROBLEM WITH BEYHIVE BOTTOM BITCH FEMINISM”