See on Scoop.it – OUR COMMON GROUND with Janice Graham ☥ Coming Up 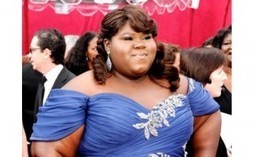 On the latest season of the TV show American Horror Story, titled Coven, plus size actress Gabourey Sidibe is front and center as Queenie, a young witch with the power of being a human voodoo doll.

"It’s disgusting to see such blatant hate thrown at a woman whose only crime is not looking like most other women in Hollywood; it’s even worse to see so much of if coming from women on Twitter. But it’s nothing new. When AHS: Coven was creeping into its season, fans took to the brain dump box that is Twitter to express their surprise that Sidibe hadn’t bothered to lose weight to earn her spot on AHS while others simply proliferated unimaginative digs at her size, using hashtags like “#big” and “#scary” to describe her casting."