Is it possible that the U.S. military is present in more countries and more places now than at the height of the Cold War? It’s true that the U.S. is reducing its forces and giant bases in Europe and that its troops are out of Iraq (except for that huge, militarized embassy in Baghdad). On the other hand, there’s that massive ground, air, and naval build-up in the Persian Gulf, the Obama administration’s widely publicized “pivot” to Asia (including troops and ships), those new drone bases in the eastern Indian Ocean region, some movement back into Latin America (including a new base in Chile), and don’t forget Africa, where less than a decade ago, the U.S. had almost no military presence at all. Now, as TomDispatch Associate Editor Nick Turse writes in the latest in his “changing face of empire” series, U.S. special operations forces, regular troops, private contractors, and drones are spreading across the continent with remarkable (if little noticed) rapidity. 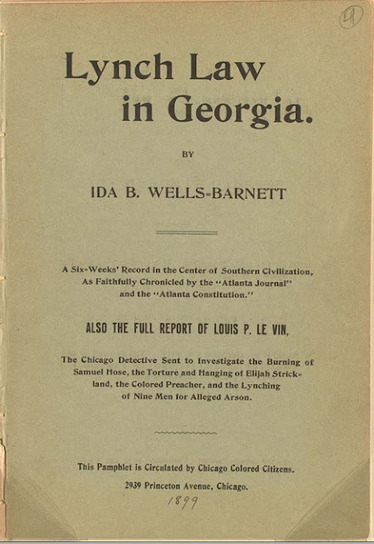 Lynch Law in Georgia: Report by Ida B. Wells
AXE!

ow. If you live long enough, you’ll see some truly gross things in politics, but Mitt Romney’s work this past week “courting black support” was enough to turn even the strongest stomach.

Romney really showed us something in his luridly self-congratulating N.A.A.C.P. gambit, followed by the awesomely disgusting “free stuff” post-mortem speech he delivered the next night in front of friendlier audiences. The twin appearances revealed the candidate to be not merely unlikable, and not merely a fatuous, unoriginal hack of politician, but also a genuinely repugnant human being, a grasping corporate hypocrite with so little feel for how to get along with people that he has to dream up elaborate schemes just to try to pander to the mob.

At first, it was hard to say what exactly Romney was thinking when he decided to address the N.A.A.C.P. He plunged into the speech with a creepy kamikaze smile and a rushed, weird (even for him) delivery, acting like someone proud of what a ballsily moronic dare he was attempting – like a high school kid mooning a squad car from the back of a school bus, or Peter McNeeley rushing face-first into the ring with Mike Tyson.

Now, it would have been one thing if Romney had put some real thought into this, if he had taken a day or two or three and really pondered the question of why 90% of black voters vote Democratic. That’s a serious question, and it would have been something if Romney had really attempted to bridge what has turned into a disturbingly ugly gap between most nonwhite Americans and political conservatives.

Without accepting blame or admitting guilt, he could have talked about the increasingly strident tone of the national debate over racially charged issues, and wondered aloud if politicians on both sides perhaps needed to find a new way to talk about these things without fearmongering, stereotyping, or trading accusations. He could have met the racial-tension issue head on, in other words, and simply declared it to be something that both parties need to work on. This was an opportunity to make history as a peacemaker, just by saying out loud the simple truth that white and nonwhite Americans, and Democrats and Republicans both, need to find more civilized ways to talk about their political concerns. If he had owned the problem, that would have been a big step forward, for all of us.

Of course, that’s expecting a lot. But even if he had just come up with a fresh, earnest new way to articulate the conservative argument, something beyond the usual sloganeering, that would have been really interesting.

Let me ask you a risky question: Does the Libor scandal really matter?

Libor is one of those magical words with the potential to instantly confuse and bore — reactions I wouldn’t normally chance. It tempts you to turn the page or click onto a different story. Please hang in for a couple of minutes.

The fact is the unfolding story about Libor interest rates and their manipulation really does matter a great deal. It speaks to big issues like the corruption of global markets and the persistent ethical failure of big institutions. It affects everyone and everything — from big companies to governments to homeowners and students. It matters to you.

Libor is an interest rate — actually a series of rates — intended to measure how much it costs big global banks to borrow money from each other. Over time, it became a benchmark for trillions of dollars worth of variable rate loans, credit, and financial instruments around the world.

Most borrowers pay Libor, plus some added interest to reflect their risk. But all those rates move up and down in tandem with changes in Libor.

The daily Libor rate is determined by a poll of banks, which report their interest rates. The problem: At least some of the big banks contributing the information may have rigged the process. Barclays PLC has admitted to it, paid a big fine, and told regulators it wasn’t alone. Other banks are under investigation by regulators who have not accused anyone else yet.

Why the Libor scandal matters to everyone – Business – The Boston Globe.

And you thought it would be easy? – Opinion – Al Jazeera English.

From immigration to healthcare, the United States Supreme court ended its Spring term with major rulings. The Court upheld both a key component of thecontroversial S.B. 1070 Arizona immigration law, and “Obamacare.” However, the Supreme Court has all but exhausted cases of major importance.

When it returns to session in October, the Supreme Court is scheduled to rule on Fisher vs. University of Texas, a case concerning Affirmative Action policies in higher education. Affirmative Action policies have been controversial since their inception. It will be up to the Court to either uphold their legitimacy, strike them down, or modify the rationale for their existence to ensure they serve a compelling purpose.

Affirmative Action is a set of policies that require that special consideration be given to ethnic minorities and women who apply for academic, job, or contracting opportunities. Such policies usually involve setting timetables for increasing minority representation in these institutions, and use recruitment, preference or reserved positions to achieve these timetable goals.

The Origins of Affirmative Action: Creating a Level Playing Field

UPDATE: Romney was booed during his speech as he promised to repeal the Affordable Care Act.

Mitt Romney deserves a bit of credit for his decision to address the NAACP on Wednesday, given that he’s running against Barack Obama, the most visible symbol of the NAACP’s success. Conservatives generally view the group as a excessively partisan. But given Romney’s antagonistic relationship with the local NAACP chapter when he was governor of Massachusetts, he may receive a particularly unpleasant reception.

Leonard Alkins, the former head of the Boston NAACP, has few fond memories of Romney’s tenure. “There was no relationship between the NAACP in Boston and Gov. Mitt Romney and his administration,” Alkins says. “The only time that the NAACP had any interaction with the administration and the governor was to protest when he eliminated the affirmative action office.”

In one of his early acts as governor, Romney dumped the state’s office of affirmative action and replaced it with the office of diversity and equal opportunity. In doing so, he invalidated a half-dozen executive orders establishing affirmative action policies for women, minorities, veterans, and people with disabilities; diversity training programs; and equal-opportunity standards for state contractors. Romney’s executive order replaced all of this with what was essentially a broad—and, Alkins says, “toothless”—commitment to “diversity.”

Romney eventually appointed a diversity commission to examine his new policy. But, according to Alkins, the NAACP was excluded from the commission—until other commissioners spoke up. “He excluded the NAACP from serving on that special commission until we protested,” Alkins recalls.

Romney appointed Alkins to the commission, but the process didn’t go well. Instead of approving Romney’s policy, the commission worked to strengthen the policies he invalidated. Word leaked to the governor, Alkins says, and the co-chair of the commission, Ruth Bramson, who was also Romney’s chief human resources officer, refused to call any more meetings, thwarting the commission from voting on and issuing final recommendations. Bramson, who is now CEO of the Girl Scouts in eastern Massachusetts, refused to comment, saying she has to stay out of politics. The Romney campaign did not respond to a request for comment. But a Romney spokesman told the Bay State Guardian at the time that Bramson felt the committee’s work was done and no further meetings were necessary.

Romney eventually agreed to temporarily reinstate the old policies, a move Alkins believes was an attem

Hours before Barack Obama accepted the Democratic nomination for president at Invesco Field in Denver in 2008, Rep. Jesse L. Jackson Jr. (D-Ill.) settled into the best seat in the house — front row, dead center. Rep. John Lewis (D-Ga.) came along and sat next to him, and the entire arc of the American civil rights movement seemed contained in the moment.

Jackson, the scion of a legendary civil rights leader sitting next to Lewis, an American icon, waiting to watch Obama make history.

The two hugged. “It was a very moving day for him and myself. We didn’t need to speak in a verbal way,” Lewis, now 72, recalled Thursday.

Mitt Romney, the presumptive Republican Party presidential nominee made a direct appeal to the African American community for its vote in his address to the 103rd NAACP convention. He touched on five areas, “…open up energy, expand trade, cut the growth of government, focus on better educating tomorrow’s workers today, and restore economic freedom…”  It was a well written and well delivered speech but Romney stated the obvious, told the audience what they already knew, and did not offer any substantive or new policy initiatives.  Unfortunately for those in attendance he was playing more to his base and not his audience.  As the late James Brown would have said, “he was talkin’ loud and sayin’ nothin’.”