. . . The 1865 amendment ended slavery, but it also contained a clause that condemned millions of African Americans to a different form of servitude— in a prison system that robbed them of their rights as citizens, writes a former Black Panther. He calls on the 2020 presidential candidates to endorse a campaign to “amend” the amendment.

As enlightened as I thought I was back in the day, I am embarrassed to say I was in a fog and did not have a clue as to how much trouble I was in because of the exception clause.

But we know better now. The campaign to amend the Thirteenth Amendment has been percolating and growing at the grassroots, beginning with a few formerly incarcerated folk, then hundreds, and now thousands.

Our ultimate target is the millions of formerly incarcerated people who are treated like former slaves and, following their emancipation from prison, like second-class citizens. We are collaborating with the civic, private and public sectors to organize an effort that is not just about social justice, but economic justice.

The “exception” clause represents, in essence, an economic detour to a people’s real freedom.

As we head into the 2020 election campaign, several candidates have begun to address criminal justice reform, specifically ways to reduce mass incarceration, which has disproportionately impacted African Americans.

We are challenging them to embrace “Amend the 13th” in order to adjust that narrative from “reform” to “change.”

Amending the Thirteenth, and removing the “exception” clause, would be a good way to signal that the nation is willing to put the legacies of slavery and Jim Crow in the historical dustbin where they belong.

Flores Forbes is Associate Vice President for Strategic Policy & Program Implementation in the Office of Government & Community Affairs at Columbia University. A former senior official in the Black Panther Party, he is the author of Will You Die with Me? My Life and the Black Panther Party (published 2006) and Invisible Men: A Contemporary Slave Narrative in an Era of Mass Incarceration (winner of the 2017 American Book Award). He welcomes comments from readers.

The United States contains less than five percent of the world’s population but incarcerates one-quarter of all prisoners across the globe. Statistics have long shown that persons of color make up a disproportionate share of the U.S. inmate population. African Americans are five times more likely than whites to serve time in prison. For drug offenses alone, they are imprisoned at rates ten times higher.

Recent scholarship has explored the roots of modern mass incarceration. Launched in the 1980s, the war on drugs and the emergence of private, for-profit prison systems led to the imprisonment of many minorities. Other scholarship has shown that the modern mass incarceration of black Americans was preceded by a 19th century surge in black imprisonment during the Reconstruction era. With the abolition of slavery in 1865, southern whites used the legal system and the carceral state to impose racial, social and economic control over the newly liberated black population. The consequences were stark. In Louisiana, for example, two-thirds of the inmates in the state penitentiary in 1860 were white; just eight years later, two-thirds were black.

The incarceration of African Americans did not begin suddenly with the end of the Civil War, however. Confinement functioned as a punishment during bondage as well. Masters were the law on their own plantations and routinely administered their own brand of justice. Although they usually relied on the whip, countless enslavers also chained their human property in plantation dungeons below the main dwelling house or in a barn. Some locked enslaved persons in a hot box under the scorching southern sun. The more formal legal system, too, sometimes deposited enslaved individuals in state or local incarceration facilities.

Charlotte, an enslaved woman from northern Virginia, experienced several of these institutions firsthand over a 17-year period. Using court records to trace her life illustrates the many official, lawful forms of imprisonment that the enslaved might encounter in the antebellum era.

In 1840, Charlotte was held in bondage in Clarke County, Virginia, west of Washington, D.C. She was only 16 or 18 years old, a dark-skinned, diminutive young woman, standing just four feet 11 inches tall. Legally, she was the property of Eliza Pine, a white woman whom Charlotte despised. Reportedly thinking that committing a crime would prompt Pine to sell her, on March 10, Charlotte set fire to a house in the town of Berryville. She was arrested for starting the blaze and placed in the local jail as she awaited trial.

Enslaved people were imprisoned briefly in local public jails or workhouses under a variety of circumstances. Masters sometimes made use of such facilities to punish bond people deemed troublesome or, if needed, to store them securely. Enslaved individuals apprehended as runaways or awaiting trial or sale at auction also saw the inside of city or county jail cells. In all of these instances, the enslaved usually measured their terms of incarceration in just days or weeks.

Source: The History of Black Incarceration Is Longer Than You Think | Time 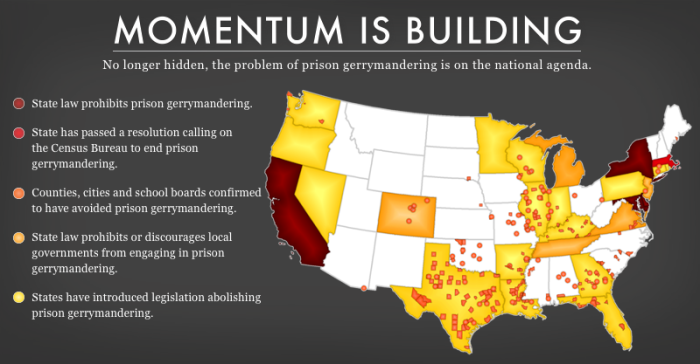 “The Bureau counts incarcerated people as residents of the towns where they are confined, though they are barred from voting in 48 states and return to their homes after being released. The practice also defies most state constitutions and statutes, which explicitly state that incarceration does not change a residence.”