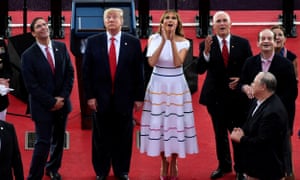 “After I left the Navy and joined the real world, I saw more and more of what this country truly was.  The mistreatment of people of color, the judgment and chastisement of the LGBT community, and the everyday sexism.  Unlike the America taught in schools, this place had a lot of scars, scratches, and quite a few gaping wounds.  But still I thought none of them were terminal.  Surely Bill Clinton (for all his flaws) had it right when he said there was nothing wrong with America that couldn’t be cured by what was right in America.  Surely.Up until November 8, 2016, I genuinely believed that, despite its myriad shortcomings, America was still the country that stood up to bullies.  It valued intellect and scientific discovery.  Americans may have disagreed on specific policies, but still had faith that public servants genuinely had the country’s best interests at heart.  Immigration built this country.  And we should always, always protect the innocent and welcome those fleeing poverty, war, or famine with open arms.But America didn’t elect a leader who represents any of those principles.  America didn’t elect a leader with any principles.  And you did that.  You can say you held your nose and voted for the “lesser of two evils,” or that you only voted for Trump because you knew he’d further the policies with which you agreed, even if you found him personally detestable.  But when you and all of the other Trump voters pulled that lever, you weren’t just selecting your preferred presidential candidate.  You were selecting what America was.  And it is nothing like the America I grew up believing in.  To say that your choice and the result it brought about triggered an existential crisis would be an understatement.  My whole life, I’d been an unquestioning, patriotic servant of America because of what I’d believed it stood for.  But in a single night, everything it stood for was revealed as a fraud.  Everything I stood for was a fraud.”

Source: Open Letter: To my Trump-supporting family. – My Daughter’s Army