Like many Black and rural Americans, Denese Rankin, a 55-year-old retired bookkeeper and receptionist in Castleberry, Ala., did not want the Covid-19 vaccine.

Ms. Rankin worried about side effects — she had seen stories on social media about people developing Bell’s palsy, for example, after they were vaccinated. She thought the vaccines had come about too quickly to be safe. And she worried that the vaccinations might turn out to be another example in the government’s long history of medical experimentation on Black people.

Then, one recent weekend, her niece, an infectious disease specialist at Emory University in Atlanta, came to town. Dr. Zanthia Wiley said one of her goals in making the trip was to talk to friends and family back home in Alabama, letting them hear the truth about the vaccines from someone they knew, someone who is Black.

Across the country, Black and Hispanic physicians like Dr. Wiley are reaching out to Americans in minority communities who are suspicious of Covid-19 vaccines and often mistrustful of the officials they see on television telling them to get vaccinated. Many are dismissive of public service announcements, the doctors say, and of the federal government.

Although acceptance of the vaccine is notching up, Black and Hispanic Americans — among the groups hardest hit by the coronavirus pandemic — remain among the most reluctant to roll up their sleeves. Even health care workers in some hospitals have declined the shots.

But the assurances of Black and Hispanic doctors can make an enormous difference, experts say. “I don’t want us to benefit the least,” Dr. Wiley said. “We should be first in line to get it.”

Many physicians like her now find themselves not just urging friends and relatives to get the vaccine, but also posting messages on social media and conducting group video calls, asking people to share their concerns and offering reliable information.

“I think it makes a whole lot of difference,” said Dr. Valeria Daniela Lucio Cantos, an infectious disease specialist at Emory. She has been running online town halls and webinars on the subject of vaccination, including one with Black and Hispanic employees of the cleaning staff at the university.

She believes they are listening, not only because she is Hispanic and speaks Spanish, she said, but also because she is an immigrant — her family is still in Ecuador. “Culturally, they have someone they can relate to,” Dr. Cantos said.

Many of the vaccine-hesitant are linchpins of health in their own families. Ms. Rankin, for example, helps care for Dr. Wiley’s grandmother, who is blind, and her grandfather, who cannot walk. Ms. Rankin looks in on Dr. Wiley’s mother, whose health is fragile. And she is the single mother of three girls, including a 14-year-old who still lives at home.
“If my aunt got infected, my family would be in tough shape,” Dr. Wiley said.

Dr. Wiley met with Ms. Rankin, her daughter and her mother in the living room of a brick ranch house on a quiet street — socially distanced and wearing masks. Dr. Wiley answered questions and explained the science behind the vaccine.

No, she said, the vaccine is not made of live coronaviruses that might infect people. No, just because someone was vaccinated and became sick, it does not mean the vaccine made them ill.

And yes, the vaccine was tested on tens of thousands of people and the data carefully scrutinized by scientists with nothing to gain and everything to lose by pushing it through prematurely.

Dr. Wiley told them she was looking forward to being vaccinated herself. 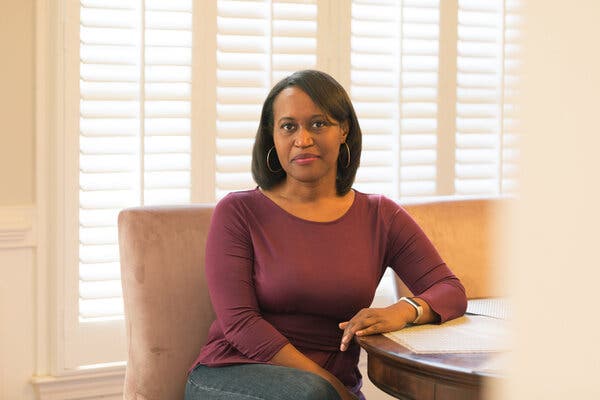 Dr. Virginia Banks, an infectious disease specialist in Youngstown, Ohio, who is Black, understands the community’s long-held distrust in the medical establishment.

But she has seen too many people — and not all of them old — suffer and die in the pandemic, she said. And Dr. Banks worries about her own risk while caring for patients. “I feel like I am playing Russian roulette,” she said.

So she recites stories to those who are hesitant about getting inoculated, like one about a patient she recently treated, gasping for breath. He asked her, “Am I going to come out of this alive?” She told him she did not know.

“We have to tell these stories” to Black Americans, she said. “And it has to come from someone who looks like them.”

“My friends and family say, ‘Even if the risk is one in a million, I am not taking it,’” she added. “I say, ‘I understand your mistrust, but this is beyond Tuskegee. This is beyond “The Immortal Life of Henrietta Lacks.” We are in a pandemic now. We have to put our faith in the science.’”

Dr. Banks stresses the ripple effects of individual decisions: “If you don’t take that vaccine and it is safe, we will be wearing masks for some time to come. If you want your life back, if you want normalcy back, you have to rely on trusted messengers like myself.”

Dr. Leo Seoane, a critical care doctor at Ochsner Health in New Orleans who is Hispanic, has already been vaccinated. When he began talking to friends and family and others in the community, virtually all of them said they would not get the shot.

They worried that the vaccine was developed too quickly, that it was not safe, that it might not be effective or might infect them with the coronavirus. Now, after gentle persuasion, “to a person, they all changed their minds.”

But few think all it will take is a conversation or two with a trusted doctor to convert vaccine skeptics into believers.

“When they first started talking about the possibility of a vaccine in April, I said, ‘No way,’” said Phelemon Reins, a 56-year-old federal government worker. He was leery of the speed of vaccine development, and he knew too well the history of mistreatment of Black people by the medical system.

“The Trump Administration has not done anything to inspire anyone to have confidence in anything coming out,” he added. “I dismiss everything they say.”

But Dr. Banks, a friend, has made him rethink his reluctance. “In the end, it will be people like her that I depend on,” Mr. Reins said. “I trust her.”

“How do they convince the African-American community?” he said. “They may have to have people who look like her.”