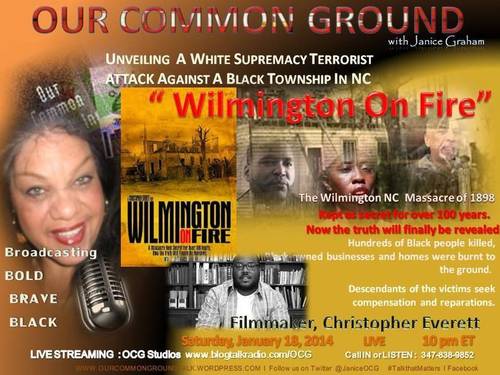 Christopher Everett’s “Wilmington On Fire, is a documentary which details a little-known, bloody massacre against an all Black township in North Carolina in 1898. The descendants of the victims of the event are asking for legal action in regards to compensation / reparations.

This feature-length documentary that will give a historical and present day look at the Wilmington Massacre of 1898 and how the descendants of the victims of the event are asking for legal action in regards to compensation. The Wilmington Massacre of 1898 was a bloody attack on the African-American community by a heavily armed white mob on November 10, 1898 in the port city of Wilmington, North Carolina. It is also considered one of the only examples of a violent overthrow of an existing government (coup d’etat) and left countless numbers of African-American citizens dead. This event was the spring board for the white supremacy movement and Jim Crow (segregation) throughout the state of North Carolina, and the American South.