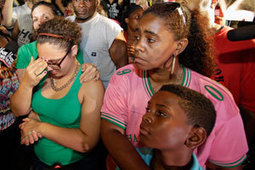 "When Zimmerman was acquitted today, it wasn’t because he’s a so-called white Hispanic. He’s not. It’s because he abides by the logic of white supremacy, and was supported by a defense team—and a swath of society—that supports the lingering idea that some black men must occasionally be killed with impunity in order to keep society-at-large safe."