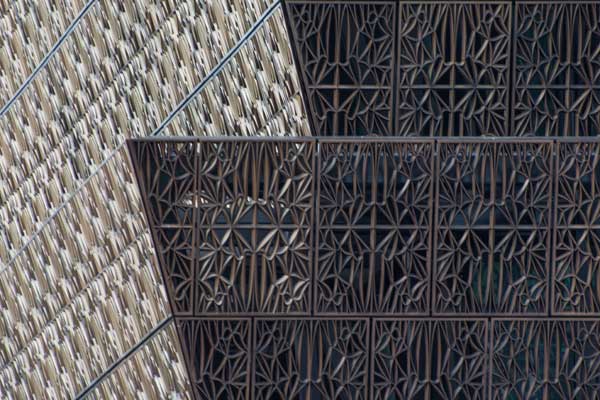 What Good Is History for African Americans?

In the spring of 2012, we sat in the lobby of the Emily Couric Clinical Cancer Center. My father, sister, and I had just left an appointment with his oncologist. My father was tired. He sat slightly hunched over in the chair with his arms crossed. His breathing was labored, and his head was slightly raised, looking ahead. We were waiting for my sister to return from handling some paperwork.

He shrugged, as he often did, when there was little point in debating the reality of things.

Basic bodily movements consumed so much of his energy. But he managed to turn his head toward me: “Make sure your mother gets my money.”

“You did alright for yourself. You did what you were supposed to do. And you didn’t let the man stop you. I guess it’s all how you looked at it.”

All of this was my father’s way of telling me two things. First, it was my responsibility to take care of his affairs once he was gone. Second, he was proud of me. But his claim that I didn’t let “the man”—white folks—stop me was significant.

What America ‘really’ is, what it amounts to, is something that we can never know precisely. Indeed, worrying too much about it may miss the point.

My father was born in Union, South Carolina, in 1932. He was of a very different generation—a time when racism and exclusion were the hallmarks of daily life for black folks, especially in the South. He never fully let go of that past. It didn’t haunt him minutely, but to a significant extent it shaped his views about what was possible. For example, when I was a junior in high school, he began to wonder what trade I would take up. I told him I wanted to go to college and he responded with familiar language: “The man ain’t gonna let you in his school. You need a trade so you can open up a storefront. Am I wrong?”

I pushed back quickly: “I’m not saying you’re wrong, I just don’t know if you’re quite right.” We disagreed, and, as he had done on the occasion of many other disagreements, he shrugged.

My father was not trying to destroy my dreams; he was trying to put them on solid footing, properly connected to the reality he thought we lived. I understood this even when I thought he was wrong. I admired it in him, and I loved him for it. To have him, confronted with the certainty of his end, tell me that I did “alright” for myself was, to say the least, an important moment for the both of us. But for him to suggest that the possibility of my success was partly tied to how I looked at things was even more significant. He was acknowledging an important difference between us—a difference between his past and my present.

Since the 2012 death of Trayvon Martin, we find ourselves confronted daily with the enormity of our racial reality. The killing of black men and women by police officers, the arms of the state, is not the only thing. Black Americans continue to struggle disproportionately in employment and education. The depth of these problems led journalist Ta-Neshi Coates to describe the situation as the logical and natural consequence of what American society is about. In The Atlantic in 2013, he observed:

When you have a society that takes at its founding the hatred and degradation of a people, when the society inscribes that degradation in its most hallowed document, and continues to inscribe hatred in its laws and policies, it is fantastic to believe that its citizens will derive no ill messaging. It is painful to say this: Trayvon Martin is not a miscarriage of justice, but American justice itself. This is not our system malfunctioning. It is our system working as intended.

In his recent book, Democracy in Black, Princeton professor Eddie S. Glaude, Jr., reinforces this claim when he remarks that valuing white people more than others in this country is “in our national DNA.” Glaude’s book is a sober reflection on our racial reality. On the one hand, it seeks to explain the deep-seated nature of racial disregard that distorts the outlook of both whites and blacks. On the other, he tries to distill from anti-racist activism the energy to reimage the values that orient American life. Unlike Coates, Glaude aims for a radical transformation of American society. But it is not clear what one is to do if one begins with the notion that the nation’s DNA makes it unresponsive to the pain of non-whites, especially blacks.

Little can be denied in Coates’s and Glaude’s analyses; it is fashionable these days, and understandably so, to wear one’s despair on one’s sleeve. After all, since the founding of this country we have seen white supremacy mutate and evolve to frustrate progress toward racial equality. Claims of white supremacy’s death—of the post-racialism supposedly evidenced by Barack Obama’s presidency—have proven premature. In the failures of Reconstruction, the eruption of lynching in the South from the 1880s through the 1960s, the rise and fall of Jim Crow, and the reconstitution of Jim Crow in the carceral state, American society has found new and inventive ways of reminding black Americans of their unequal worth.

There is no need to be naïve. The success of some black Americans in no way indicates what is possible for all black Americans. But the persistence of racial inequality demands a response. And as my father understood near the end of his life, how we respond depends on how we see our racial reality. In other words, how we frame the problem is a critical choice.

We—and here I mean black Americans engaged in struggle as well as white Americans who stand in alliance—must confront some crucial questions. Can American democracy only work if some are privileged while others are oppressed, or are we justified in our hopes for a truly inclusive and fair society? Is American democracy constitutionally at odds with our goals, as Coates seems to suggest? Or might it be conducive to building a society in which we all can live equally and at peace with one another?

How we answer these questions depends not only on which histories we consult, but also the weight we accord to the ones we use. In our historical calculus, we might emphasize the reconstitution of white supremacy, but we could just as easily emphasize the ways in which it has been foiled through multiple waves of racial inclusion. Those who embrace the former as our “true” racial reality find themselves trying to prove to those of us who have benefited from racial struggle why our success is illusory or, at best, temporary. But those who locate America’s identity in its resistance to white supremacy have another problem. They are often unable to see the evidence of systemic racism, or they readily describe it as anomalous, foreign to the structure of our institutions. If the first posture seems unsatisfying because it denies human agency and gives the past too much power over the future, the second risks turning a blind eye to the ways white supremacy is often bolstered by institutional support and state violence. Both sides fail to distinguish between the somewhat different tasks of studying the past and narrativizing the past in a way that is useful for moving society in an auspicious direction.

What America “really” is, what its history amounts to, is something that we can never know precisely. Indeed, worrying too much about this may miss the point: we ask such questions of the past less to understand who we have been than to aid us in making decisions about who we should become. This is, we might say, the aspirational quality of the American imagination. The best of the tradition of anti-racist struggles in the United States, including our current Black Lives Matter movement, is nurtured by this idea.

We should stop trying to pinpoint the “true” or “real” identity of the nation as it relates to the status of people of color. Rather, the only question worth asking, if an inclusive democratic society is our goal, is how we should interpret the history of our racial past in order to sustain our hopes. Responding to this question will capture what democracy has always been about: people trying to determine for themselves the kind of society they want to inhabit. This is a utopian—dare I say revolutionary—impulse because it sees democracy as an exercise of our moral imagination, struggling to be realized in practice. We need not look despairingly upon the past because it overdetermines our present; neither do we need to see the past as anchoring a long arc of justice or an inevitable march toward progress. We can instead say simply that there is work to be done and it is ours to do. This is our trade.

Source: What Good Is History for African Americans? | Boston Review