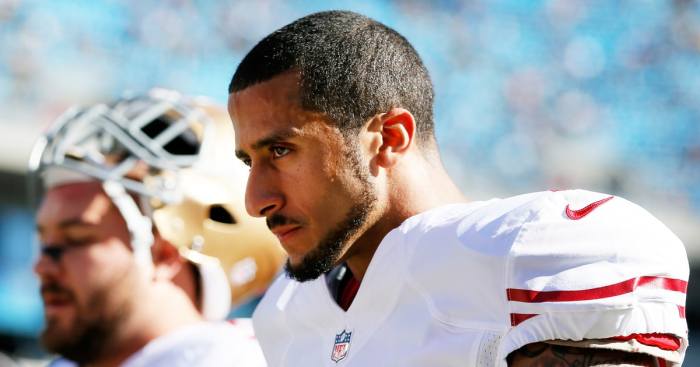 http://www.rollingstone.com/sports/colin-kaepernicks-national-anthem-protest-w436704
San Francisco 49ers quarterback Colin Kaepernick says he will continue to sit during the National Anthem as protest.

The role of the famous black athlete has been a polarizing one for as long as sports have dominated American headlines, going all the way back a century to when Jack Johnson beat white boxer Jim Jeffries in 1910. During Johnson’s time, he was regarded as a “bad nigger,” not only because he was articulate and handsome, but also because he beat his white rivals. It was a direct representation of black masculinity as a threat to white supremacy. In recent times, however, this kind of resistance has evolved. From track and field medal winners Tommie Smith and John Carlos raising their fists as a Black Power salute at the 1968 Olympics to WNBA players wearing Black Lives Matter T-shirts, black athletes are expanding their sportsmanship into political activism.

Why Historic Wins by Simone Biles, Simone Manuel Matter for Race in America

Athletic exceptionalism as a political statement

Last Friday, San Francisco 49ers quarterback Colin Kaepernick refused to stand for the National Anthem during a preseason game against the Green Bay Packers. By Saturday morning, what should have been a meaningless football game was dominating the national news.

“I am not going to stand up to show pride in a flag for a country that oppresses black people and people of color,” Kaepernick said of his decision not to stand, the start of a protest that the quarterback said yesterday will continue until “there’s significant change, and I feel like that flag represents what it’s supposed to represent and this country is representing people the way that it’s supposed to, I’ll stand.”

While black men only make up six percent of the American population, they comprise a staggering seventy percent of NFL rosters. However, their power is mainly found on the field, since there are currently no African-Americans who are a majority owner of any team and no African-American CEOs or Presidents. The majority of NFL players are black, while the NFL fan base is 83 percent white and 64 percent male. These are people who pay staggering amounts of money to watch black men who have their bodies battered on the field. As long as they run and tackle, keep their helmets on, and their mouths shut, then they are acceptable to the white mainstream public. However, when black athletes choose to point their aggression not towards each other but to larger, systematic inequalities, that’s when the backlash begins.

White 49ers fans posted videos burning Kaepernick’s jersey and actor Chris Meloni took to Twitter to criticize Kaepernick’s method of political protest, because, as the Law & Order: SVU star saw it, the quarterback was disrespecting the American flag (Meloni later deleted the tweet). People swarmed social media, calling Kaepernick a disgrace, that he was a privileged rich athlete, that he was equally arrogant and ignorant to the sacrifices of American soldiers. And it all had a familiar ring to it.

This outcry is reminiscent of Muhammad Ali’s political activism when he refused to enlist in the Vietnam War in 1967. David Susskind, an American television host, said, “I find nothing amusing or interesting or tolerable about this man. He’s a disgrace to his country, his race, and what he laughingly describes as his profession.” The man that today we call “The Greatest” was ridiculed all across the country and media. “My conscience won’t let me go shoot my brother, or some darker people, or some poor hungry people in the mud for big powerful America,” he said. “And shoot them for what? They never called me nigger, they never lynched me, they didn’t put no dogs on me, they didn’t rob me of my nationality, rape and kill my mother and father. … Shoot them for what?” What Kaepernick and Ali as black athletes unleash through their political activism is a rupture in what is expected of them and how their allegiance to this country has never been rightfully earned.

Toni Morrison once said, “In this country, American means white. Everybody else has to hyphenate.” Kaepernick’s protest, just as Ali’s refusal to participate in the Vietnam War, tapped into an entrenched, historical fear of race in this country, that blackness is by default anti-American. This is why when gymnast Gabby Douglas did not place a hand over her heart for the pledge of allegiance during the 2016 Rio Olympics, she was heavily criticized to the point where she released a public apology. Meanwhile, white shot-putters Ryan Crouser and Joe Kovacs kept their hands down at their side and no one questioned them. Whiteness is considered to be intrinsically American; therefore, a white athlete’s allegiance to the flag is assumed whereas with black athletes, it is more heavily enforced. White people want minorities to pledge their allegiance to the flag and stand for the National Anthem because then it reinforces the false belief that everyone is equal and uniformly protected under the law and constitution. It is a form of cognitive dissonance that African-Americans are coerced into believing in; they are encouraged to forget that the flag’s creation transpired when African-Americans were still slaves and that the full version of the National Anthem condemned slaves who sought to fight with the British people in order to achieve freedom.

When Kaepernick chose to remain seated for the National Anthem, he chose to channel his aggression traditionally demonstrated through football and turn the focus in order to make a politically charged statement. As a politically conscious African-American male, his form of protest was not to disrespect the military, but to redirect the domestic aggression towards marginalized bodies like the one in which he inhabits. He, just like Ali, Tommie Smith and John Carlos raising black-gloved fists at the 1968 Olympics, LeBron James wearing an “I Can’t Breathe” shirt on the court, and countless other African-Americans both athletes and non-athletes, do not feel protected at home because of the rampant videos of black persons dying at the hands of police who commit these murders with impunity. How can an oppressed person perceive the threats abroad when they feel threatened here at home?

Today, Ali is revered as one of our greatest American icons as well as a political hero. It will take decades before we can judge if Kaepernick will be viewed in the same way. Nevertheless, his position as a black male athlete will never be a fixed one. Through his protest, he has moved from being a mere football player performing for white spectatorship and one who is conscious and partaking in a larger movement for liberation of oppressed Americans of color. People aren’t merely upset because he is disrespecting the flag; they are upset because Kaepernick’s anger illuminates just how divided this nation is and has always been.