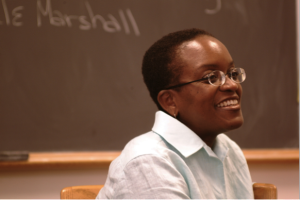 July 1st, 2015 marks an event that many students of color at predominantly white institutions could imagine only in their wildest dreams: a black feminist scholar will become the president of Swarthmore College. Valerie Smith, who has served as Princeton University’s Dean of College for the past three years, was announced president-elect of the private liberal arts college this past February.

Smith is an accomplished leader making history in more ways than one with her election. An interdisciplinary scholar of African American literature and culture, Smith brings an intersectional perspective to academe as a woman of color invested in mobilizing education for social change. While at Princeton, she founded the Center for African American Studies and led initiatives to diversify faculty members and the student body.

At Princeton, Smith also chaired a committee that examined the academic and cultural experiences of low-income and first-generation students…