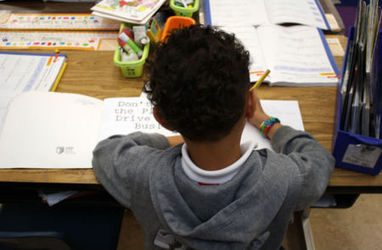 A nascent program in Oakland schools is trying to disentangle the threads that many believe drag black boys out of classrooms and into jails.

Researchers have clearly established the contours of the pipeline. During the 2011 school year, more than 3 million public school students were suspended and over 100,000 expelled. These students were overwhelmingly black. According to the Department of Education, black students are suspended and expelled at three times the rate of white students. Save for American Indians, no other racial group experiences such outsized racial disproportionality in exclusionary discipline. Indeed, the federal government has said that the racial disparity in punishment levels can’t be explained by differences in kids behavior alone. Importantly, just one of those suspension can double the likelihood that students will drop out of school, and increase the likelihood that students end up in prison. A disproportionate number of students of color are even arrested at school as a form of punishment.