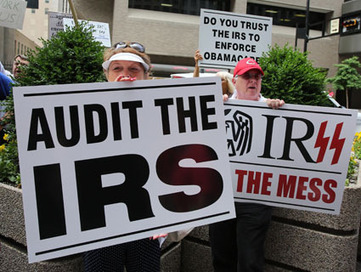 In 2011, the IRS killed audits of five big-time donors. Inside the IRS mess you haven’t heard about.

"Yet lawmakers have no qualms with using politics to bend the IRS to its will. In 2011, under pressure from House and Senate Republicans, Miller, then the IRS’s deputy commissioner, spiked audits investigating whether five big donors to 501(c)(4) groups—the type of nonprofit that can get involved in campaigns and elections but can’t make politics its "primary activity"—avoided paying taxes on their donations. It’s not known which party any of these donors favored, but suffice it to say that Miller’s decision erased any worry that wealthy political patrons might have had about giving millions to politically active nonprofits during the 2012 campaign season.

For some tax lawyers, it was a surprising move that raised red flags. "They were stopped mid-audit, which is an extraordinary move," says Marcus Owens, a tax lawyer who ran the IRS division that oversees politically active nonprofits for 10 years. "I’ve been practicing tax law for close to 40 years, and I’ve never seen that. To have Miller reach out and stop those audits, that’s something that really deserves an inquiry."